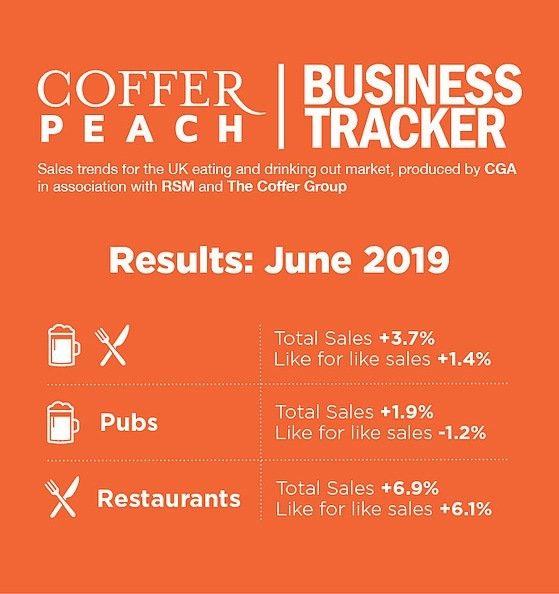 June was a better month for eating and drinking out across Britain – although pub and restaurant operators experienced widely contrasting fortunes, according to latest figures from the Coffer Peach Business Tracker.

Collective like-for-like sales across the combined managed pub and restaurant market, which the Tracker measures, were up 1.4% against June last year. But while pubs and bars saw a 1.2% decline in like-for-like trading, restaurant groups were collectively up 6.1%.

“And it’s all down to football and the weather,” said Karl Chessell, director of CGA, the business insight consultancy that produces the Tracker, in partnership with The Coffer Group and RSM.

“Last June, pub and bar groups saw sales jump 2.8%, largely thanks to the mini-heat-wave at home and England’s good showing in the men’s football World Cup, while restaurants suffered a 1.8% decline. This June the roles have been reversed, with more sedate conditions favouring eating rather than drinking out,” said Chessell.

“These are encouraging numbers. Last June, the World Cup gave an overall boost despite restaurants suffering and to beat those numbers on a net basis shows some much-needed positivity. It’s tough out there but the hospitality sector is showing some much need resilience,” said Mark Sheehan, Managing Director at Coffer Corporate Leisure.

“It demonstrates how outside factors still influence trading patterns. The underlying good news is that the market overall still grew, if modestly, by 1.4%, despite all the current political uncertainty, predictions of tumbling consumer confidence and flat trading in May,” Chessell added.

Regionally, market performance inside and outside of London was broadly in line, with like-for-likes up 1.8% and 1.3% respectively. In pubs and bars, drink sales took a bigger hit than food over the month, down 2.2% against a 1.2% fall in meals. Restaurants recorded a 2.9% increase in covers over the month.

Total sales across the 50 companies in the Tracker, which include the effect of net new openings since this time last year, were ahead 3.7% compared to last June.

“A number of high-profile restaurant closures in recent months has culminated in a net reduction of sites in June, leaving those operators that remain to benefit from reduced competition. We put much of this month’s increase in like for like sales down to supply and demand approaching a more even keel. There are certainly more challenges ahead, but these results will be pleasing news to embattled food-led operators,” said Paul Newman, Head of Leisure and Hospitality at RSM.

Underlying like-for-like growth for the Tracker cohort, which represents both large and small groups, was running at 1.6% for the 12 months to the end of June.

The Coffer Peach Tracker industry sales monitor for the UK pub, bar and restaurant sector collects and analyses performance data from 52 operating groups, with a combined turnover of over £9bn, and is the established industry benchmark.