Easter heatwave is good for drink sales, bad for eating-out 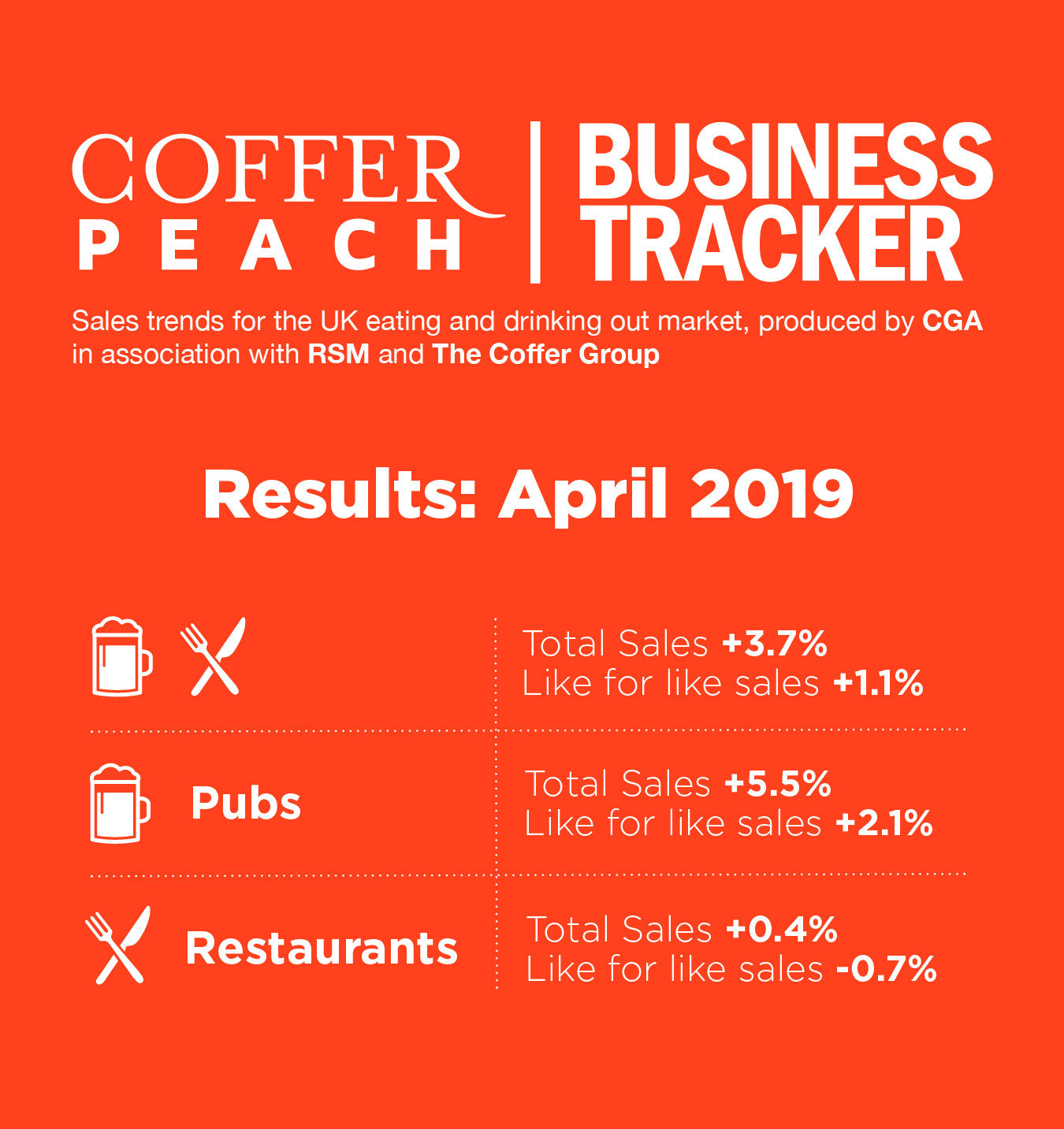 Pub and bar chains reported collective like-for-like sales up 5.3% for the four-day break compared to Easter 2018, with drink-led pubs up a thumping 10.9% as the public headed outdoors.

However, the overall eating and drinking-out market was actually down 3.6% over the four-day weekend, as in stark contrast to pubs restaurant chains saw collective like-for-like sales tumble a massive 19.4% against last Easter’s trading.

“You simply can’t escape the fact that weather always has a major influence on the fortunes of the pub and restaurant sector – and what’s good for pubs is rarely good for restaurants. These Easter figures just underline that reality,” said Karl Chessell, director of CGA, the business insight consultancy that produces the Tracker, in partnership with Coffer Group and RSM.

“The Easter weekend last year, which fell in March rather than April, was good for trade overall, and particularly restaurants, as although the weather wasn’t stunning, the holiday weekend came in the aftermath of the snow that accompanied the Beast from the East. There was plenty of pent up demand from people wanting to get out, which helped boost sales across the sector by almost 6% against Easter 2017. So, although this Easter may have been a bit of a disappointment overall, it was still better than two years ago,” added Chessell.

There was better news for the month of April overall however, helped by the fact that it contained the Easter period this year. Collective like-for-like sales for the combined managed pub, bar and restaurant sector were up 1.1% on April last year. Pubs and bars were up 2.1%, while restaurant groups reported like-for-like decline of 0.7%.

“Within the pub grouping, drink sales were ahead 2.7%, with food up a more modest 0.8%,” observed Chessell.

Mark Sheehan, managing director at Coffer Corporate Leisure, said, “The Easter numbers are difficult to measure because of the contrasting weather year on year and later Easter.  The April numbers overall though were down and show the pressure the hospitality sector is under – like many other sectors relying on consumer confidence.  Pubs trade well when consumer confidence is low, but the restaurant sector is also affected by the retail woes we are seeing.  This could be a difficult summer whilst we have no resolution to Brexit.”

“It is no surprise that Britons sought out their local beer garden to escape the record temperatures over the Easter weekend. Whilst the weather and Brexit delay seem to have brought some short-term relief for the UK pub industry, the challenges affecting the casual dining sector show no such let up. Fierce competition from new openings continue to hit top line growth whilst additional costs from increased minimum wage and pension contributions bite into margins. The eating and drinking out sector desperately needs a sustained run of positive sales growth just to stand still,” said Paul Newman, head of leisure and hospitality at RSM.

Regionally, London saw a fall in like-for-like trading, down 0.7% on last April, while outside the M25 was up 1.7% on a like-for-like basis for the month.

“Usually London does well over holiday periods, but it appears that the combination of climate change protests, closed railway stations and people heading out of town to seek the sun has taken its toll on London based operators,” added Chessell.

Looking at the underlying trends, however London is still outperforming the rest of the country. Market like-for-likes overall were up 1.7% for the 12 months to the end of April, with London running at 2.5% ahead and outside the M25 up 1.5%.

Total sales across the 50 companies in the Tracker, which include the effect of net new openings since this time last year, were ahead 4.0% compared to last April, showing that although openings have slowed they have not stopped.

The Coffer Peach Tracker industry sales monitor for the UK pub, bar and restaurant sector collects and analyses performance data from 50 operating groups, with a combined turnover of over £9bn, and is the established industry benchmark.