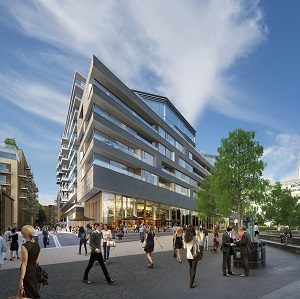 A trio of new restaurant signings have taken place recently at Berkeley Homes’ landmark development, One Tower Bridge. The latest announcements include The Coal Shed and Rosa’s Thai Cafe, which join The Ivy and acclaimed Welsh chef, Tom Simmons, who recently unveiled plans for his first London venture at the scheme.

Located at the foot of Tower Bridge and opposite UNESCO world-heritage site, the Tower of London, One Tower Bridge is a mixed use-use development of high specification apartments, commercial and cultural space. To date, ninety-five per cent of the apartments are sold and approximately seventy-five per cent of prime commercial and cultural space is now let. Davis Coffer Lyons advises on the letting of leisure space at the scheme.

Establishing itself as the Covent Garden of the South Bank, the new hospitality offering at One Tower Bridge will complement the highly anticipated arrival of Sir Nicholas Hytner’s and Nick Starr’s 900 seat Bridge Theatre, which is due to open this autumn, cementing the development as a world-class fine dining and leisure destination.

One Tower Bridge already benefits from millions of visitors which are drawn to the surrounding tourist attractions and Potter’s Field Park as well as the premium office district of More London. The Coal Shed, a Brighton based steak restaurant, has chosen the site for its first venture into the capital. It has taken approx. 2,300 sq. ft. of space overlooking the recently completed public piazza at the centre of the development. Rosa’s Thai Cafe, which has a small collection of restaurants across London, will occupy approx. 1,250 sq. ft. on Duchess Walk, the development’s new pedestrianised street. Both restaurants are due to open this autumn.

Tom Simmons’ Tower Bridge restaurant will be the first to open, ahead of The Ivy, in early spring. Set over ground and mezzanine floors, the restaurant spans approx. 1,760 sq. ft. and will offer all day dining influenced by both British and French cuisine, with an emphasis on Tom’s Welsh heritage.

In addition to the offering at One Tower Bridge, five-star boutique hotel LaLiT London, located next door to the scheme, is home to the award-winning Pan Indian restaurant Baluchi, serving a contemporary take on classic multi-regional Indian dishes. The hotel opens to guests this month (February.)

Harry Lewis, Managing Director of Berkeley Homes (South East London) Ltd, comments: “We are delighted to have signed three exceptional new restaurants at One Tower Bridge so far this year. These will add to the exciting mix of international cuisine we are curating here, which along with the Bridge Theatre, will make One Tower Bridge the destination of choice for residents, diners and theatre goers alike. This unique development represents city living at its very best.”

Alex Moore, Co-Founder at Rosa’s Thai Cafe, adds: “We know the area well as Saiphin, our head chef and co-founder, used to cook for the offices in the area around Tooley Street when we first started Rosa’s Thai Cafe as a market stall in Brick Lane. It’s a location we know has great lunchtime and dinner potential, but, more importantly, it completes a nice circle for Rosa’s because of Saiphin’s connection with the area. We’re very excited to be returning to the neighbourhood and opening at One Tower Bridge.”

Razak Helalat, Director of The Coal Shed, adds: “Having enjoyed wonderful and humbling success in Brighton with both The Coal Shed and The Salt Room restaurants, we are incredibly proud to bring The Coal Shed to One Tower Bridge. Since opening nearly six years ago, it feels like a natural progression to be opening to a new audience in London where we will remain fully committed to our love for quality ingredients, expertly cooked. It goes without saying that we are more than excited about what lays in store.”

In total, One Tower Bridge comprises 80,000 sq. ft. of retail, leisure and cultural space in addition to 419 high specification new apartments. The development is surrounded by public realm, including a riverfront walkway, landscaped piazzas and a new pedestrian street linking Tooley Street to the river Thames.