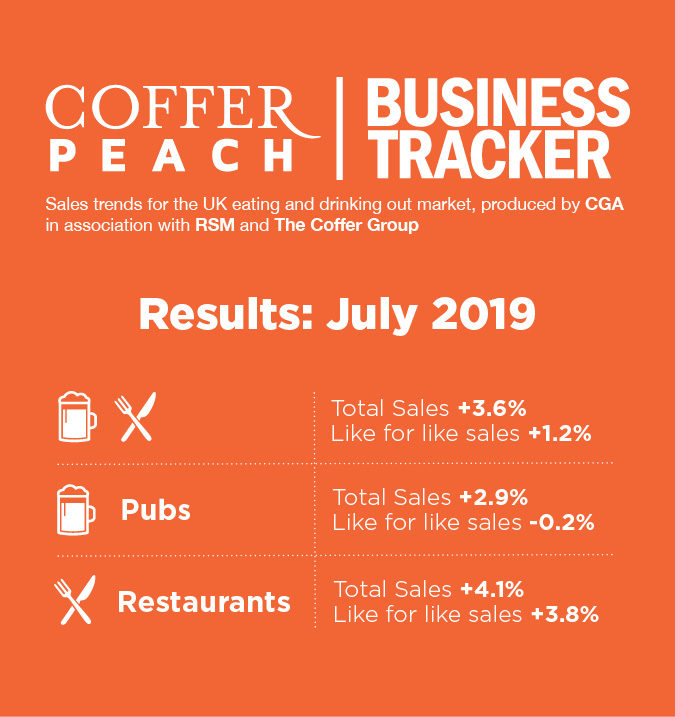 Restaurant groups saw like-for-like sales up a healthy 3.8% against last July, when trading was hit by hot weather and World Cup football. Managed pubs, which had a bumper July because of the World Cup and the sunny weather, saw sales slip back this July, but only to -0.2%.

“Considering the barnstorming July that pubs had last year, holding relatively steady this July will be seen as a good performance, and restaurant groups will be more than relieved with their sales recovery,” said Karl Chessell, director of CGA, the business insight consultancy that produces the Tracker, in partnership with Coffer Group and RSM.

“These figures are very much ‘steady as she goes’ for both the pub and restaurant sectors. Pub like-for-likes were always going to be challenging against a World Cup year and the exceptional weather of 2018. Decent weather in 2019 as well has no doubt helped sustain performance on the wet-led side. We continue to see very good results from quality operators with good demand for new sites across the country from both established and emerging operators across both sectors,” said Trevor Watson, executive director, valuations at Davis Coffer Lyons.

“Following a good showing in June when collective like-for-likes across the sector grew 1.4%, the eating and drinking-out market is showing some resilience. Nevertheless, with Brexit looming, there will be real nervousness about a crash in autumn,” Chessell added.

Total sales across the 54 companies in the Tracker, which include the effect of net new openings since this time last year, were ahead 3.6% compared to last July.

Saxon Moseley, senior manager at RSM, said, “Sustained like-for-like growth will come as welcome news to Britain’s restaurant groups and provides further evidence that supply is reaching parity with demand. With pubs and bars buoyed by a summer heatwave in July, operators will be hoping for more good weather to stave off consumer uncertainty around Brexit.”

Underlying like-for-like growth for the Tracker cohort, which represents both large and small groups, was running at 1.8% for the 12 months to the end of July, up from 1.6% at the end of June.

The Coffer Peach Tracker is the established industry benchmark and sales monitor for the UK pub, bar and restaurant sector, collecting and analysing performance data from 54 operating groups, with a combined turnover of over £9bn.