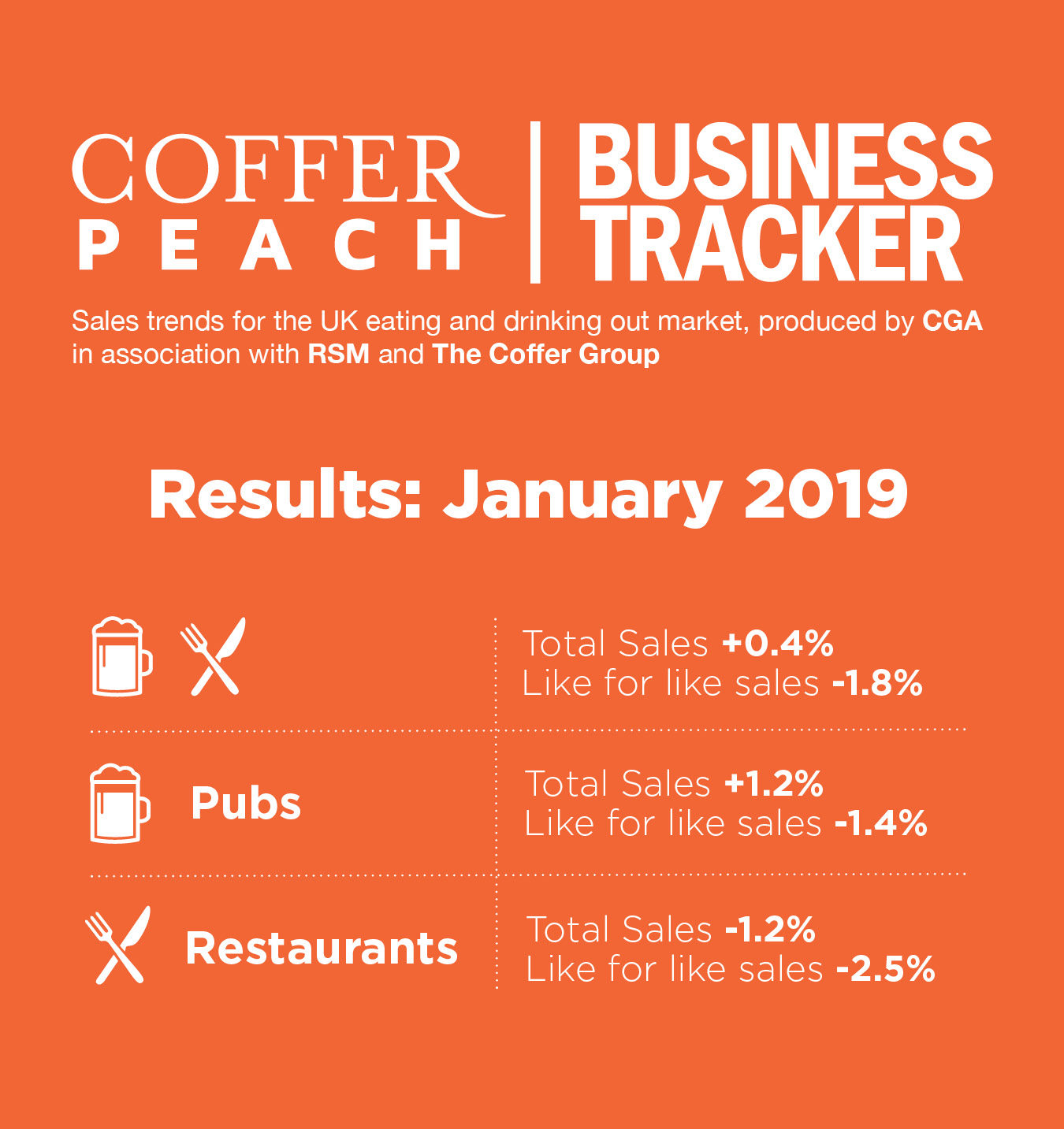 Britain’s managed pub and restaurant groups saw sales slump in January after a strong Christmas, according to latest figures from the Coffer Peach Business Tracker, with collective like-for-like sales down 1.8% against the same month last year.

“After strong trading over the festive season, which saw sector like-for-like sales 4.1% up on 2017, operators will be disappointed that there has been no follow-through into January – even though the weather, and in particular the lack of snow early in the month, was better than last year,” said Karl Chessell, director of CGA, the business insight consultancy that produces the Tracker, in partnership with The Coffer Group and RSM.

“However, it is worth remembering that January is always a relatively quiet month. The first big test of the year for the market is the February half-term holidays, then Easter – although this year Brexit is bringing more anxiety for the industry,” Chessell added.

Both pub and restaurant operators saw negative sales during the month, although pubs did marginally better with collective like-for-likes down 1.4% against 2.5% for restaurant chains. Overall like-for-like trading in London was essentially in line with the rest of the country, down 1.9% compared to minus 1.7% outside the M25.

The big contrast was between the performance of managed pubs and group-owned restaurants in the capital, with the former down just 0.5% against a more significant 4.1% sales decline for restaurants during January.

In the rest of the country outside the M25, the difference in performance was less stark, with pubs’ like-for-likes down 1.6% and restaurants down only 2.0%.

“Branded restaurant operators continue to have a tougher time than pubs, despite many closing under performing sites in the last year, and that is most marked inside the M25 where competition is more intense and consumers are more likely to look for, and find, somewhere new to try out,” Chessell added.

“The figures are indicative of the malaise affecting consumers in the post-Christmas period. Trading prospects are likely to remain weak, which mirrors statistics for the wider UK economy where there is a clear indication of a slowdown,” said Trevor Watson, Executive Director, Valuations at Davis Coffer Lyons. “The strongest innovative operators who continue to exceed customer expectations in terms of service and value are trading well as indicated in Christmas trading statements.”

“Despite Dry January, drink sales in pubs held up better than food sales, down 0.7% compared to minus 2.0%, suggesting underlying food growth in pubs appears to be peaking, as competition and choice in food out-of-home increases generally, and premiumisation of the drinks sector is stimulating alcohol sales,” added Chessell.

RSM’s head of leisure and hospitality, Paul Newman said: “Even if consumers went out to eat and drink in similar numbers, the increased uptake of Veganuary compared to last year reduced spend per head as diners opted for cheaper vegetable / plant-based dishes over meat options. Wet led operators were also hit by the growing influence of Dry January with much of December’s uplift being undone by these disappointing results. We expect discretionary spending on eating and drinking out to remain constrained as Brexit uncertainty continues to weigh on consumer sentiment.”

Total sales across the 49 companies in the Tracker, which include the effect of net new openings since this time last year, were ahead 0.4% compared to last January.

Underlying like-for-like growth for the Tracker cohort, which represents both large and small groups, was running at 1.2% for the 12 months to the end of January.

The Coffer Peach Tracker industry sales monitor for the UK pub, bar and restaurant sector collects and analyses performance data from 49 operating groups, with a combined turnover of over £9bn, and is the established industry benchmark. Learn more: www.cga.co.uk/category/cpbt