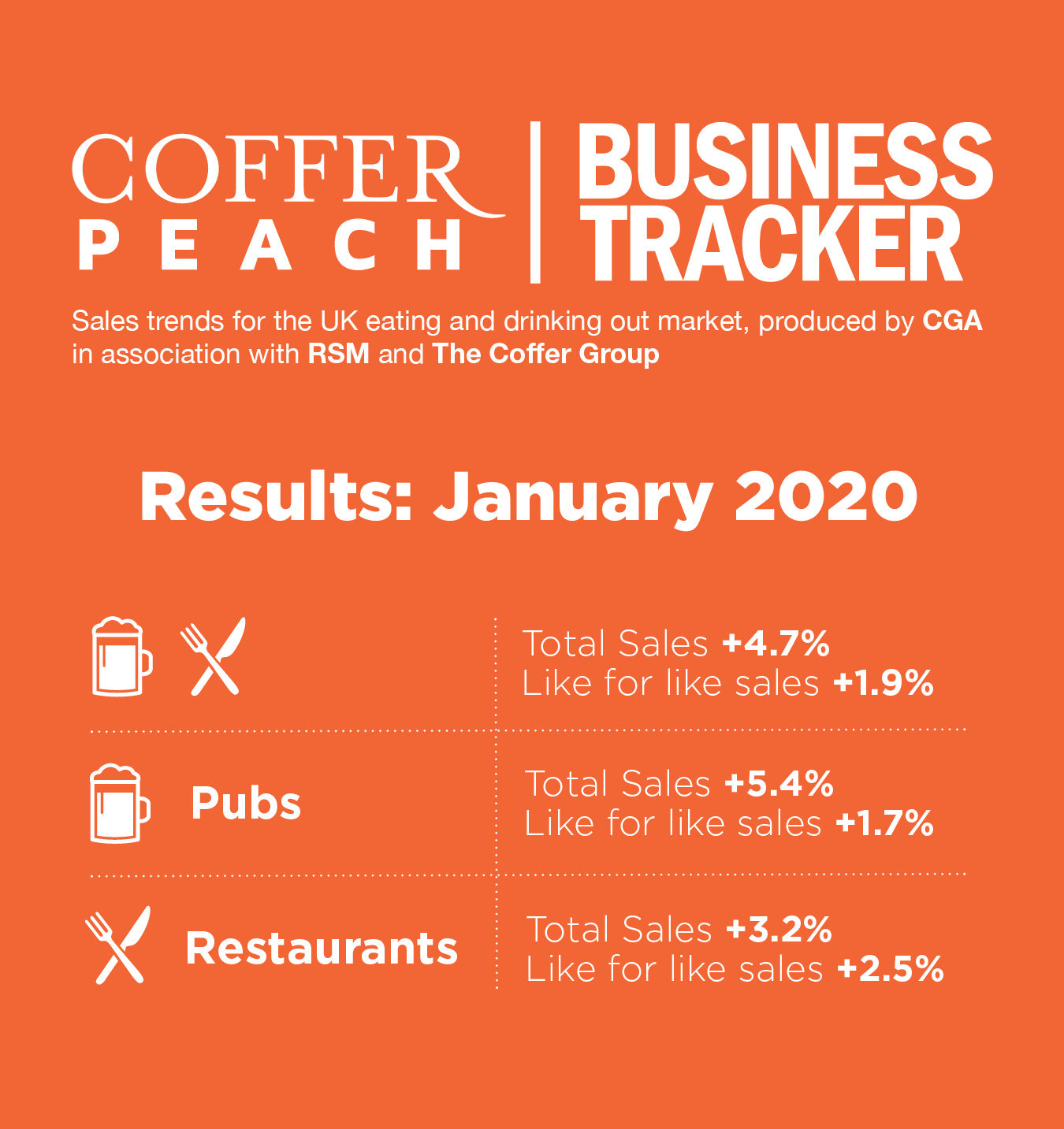 Britain’s managed pub, bar and restaurant sector have kicked-off the New Year on the front foot, with collective like-for-like sales up 1.9% in January compared to the same month last year, latest figures from the Coffer Peach Business Tracker show.

“Reasonably good weather, in particular the lack of snow, will have helped sales, but nonetheless it is encouraging to see that the public is continuing to go out to eat and drink,” said Karl Chessell, director of CGA, the business insight consultancy that produces the Tracker, in partnership with The Coffer Group and RSM.

Regionally, London had a tougher time but still saw like-for-likes ahead 0.7% compared to 2.3% outside the M25.

Restaurant groups saw the biggest increase in January, with like-for-likes up 2.5%, driven almost entirely by strong sales outside of London. Managed pubs saw like-for-likes grow 1.7% over the month, while bar operators were also up, although by only 0.9%.

January’s positive results come on the back of strong trading over the festive period, which saw collective like-for-likes up 2.5% against the previous year.

Trevor Watson, executive director at Davis Coffer Lyons, said: “To put these figures in context, last January the market saw a 1.8% drop in like-for-likes against 2018, so essentially we are back to where we were two years ago. But it does show an underlying stability in the market, despite the political climate and what has been going on in the wider economy. The eating and drinking out market is showing resilience and people’s appetite for going out remains intact.

There is a universal feeling of improved investor confidence, however this has not yet translated into deal flow. The stabilised consumer confidence combined with a stronger investor mentality is likely to result in steady improvement as the year progresses. We are off to a decent start,” Watson concluded.

Paul Newman, head of leisure and hospitality at RSM, said, “A year-over-year sales boost is a welcome reward for the many pubs, bars and restaurants who refined their New Year offering to capitalise on the trends for Veganuary and alcohol alternative drinks. Any sales increase will be welcomed by a sector that still faces tremendous cost pressures, particularly around people, business rates and food prices. Operators will eagerly await any news on the easing of such costs from Sajid Javid’s upcoming budget announcement.”

Underlying annual like-for-like growth for the Tracker cohort, which represents both large and small groups, was running at 1.6% at the end of January,” said Chessell.

Total sales for the month, which include the effect of new openings since this time last year, were ahead 4.7% compared to same period in 2019.

The Coffer Peach Tracker industry sales monitor for the UK pub, bar and restaurant sector collects and analyses performance data from 58 operating groups, with together almost 10,000 sites and a combined turnover of over £11bn and is the established industry benchmark.