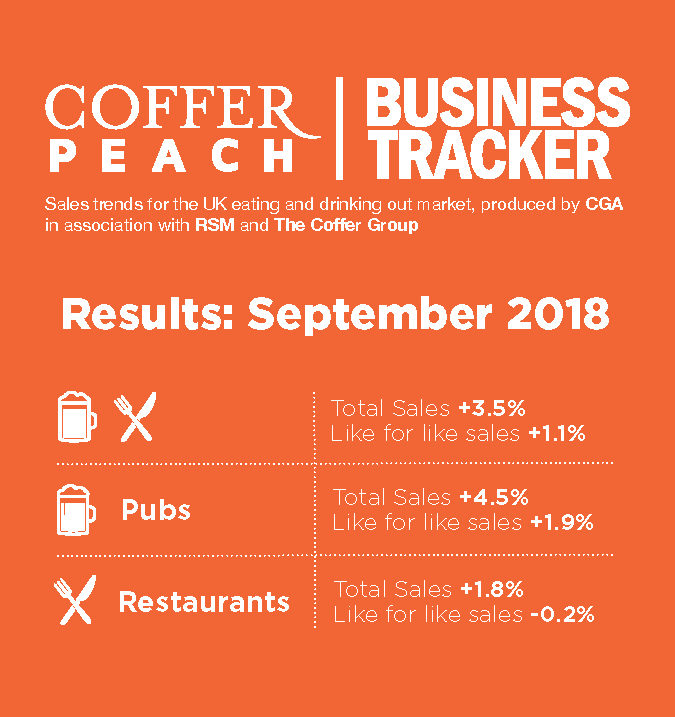 Sunny weather in September again proved good news for Britain’s managed pubs, with collective like-for-like sales up 1.9% on the same month last year, according to latest figures from the Coffer Peach Business Tracker. But restaurant chains had another tough month.

Overall, the managed pub and restaurant sector saw a 1.1% uplift in like-for-like trading last month, but that was due entirely to strong pub sales – and especially from drink. Collectively, restaurant chains continued to experience depressed trading, with like-for-likes down 0.2% on the same period in 2017.

“As ever, the good weather played a big role, and although restaurants as a whole failed to benefit, it provided an overall boost for the out-of-home market as the public were tempted out,” said Karl Chessell, director at CGA, the business insight consultancy that produces the Tracker, in partnership with Coffer Groupand RSM.

Regionally, London outperformed the rest of the country with like-for-likes ahead 2.0% against 0.9% for outside the M25.

“London pubs and bars also had the best of the trading with like-for-likes up 3.0%. It’s also worth noting that within those national managed pub numbers, food sales were flat, with drink sales up 3.0%,” added Chessell.

“While food-led operators continue to face tougher trading conditions, the wet-led end of the market is trading strongly,” said Paul Newman, head of leisure and hospitality at RSM. “Growth in the traditional pub market is being fuelled by the premiumisation of drinks offers, with craft beers, artisan spirits and cocktails driving sales up by 1.9% compared to a year ago. We see this trend continuing in the all-important run up to Christmas.”

“Although casual dining chains are collectively finding trading difficult, they are not in wholesale retreat. Despite some high-profile announcements of site closures, many are still opening in new locations, especially out of London. As the data for September shows, while same-store sales outside the capital were down 0.4% for the month, total sales were up 2.4%, fuelled by restaurants opened over the last 12 months. The market remains challenging but some operators—especially wet-led pubs, are trading strongly,” added Mark Sheehan, Managing Director at Coffer Corporate Leisure.

Total sales growth across the whole pub and restaurant sector was 3.5%.

Underlying like-for-like growth for the 49 companies in the Tracker cohort, which represents both large and small groups, was running at 0.6% for the 12 months to the end of September, virtually the same as at the end of both August and July, showing that the eating and drinking out market remains consistently flat.