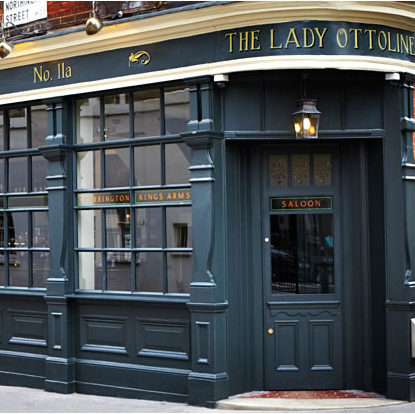 Noble Inns owner Scott Hunter said: Our company has changed significantly in the three years weve had the Lady Ottoline, and it became clear earlier this year that as the company continues to grow we are moving in a direction far removed from its style.

Truffle Hunting, which is run by Nigel Sutcliffe and James MacLean, is behind projects such as Newman Street Tavern in Londons Fitzrovia, the Princess Victoria in Shepherds Bush and the Henry Root in Fulham. The company has brought in chef Richard Meakin from the Princess Victoria to head the Lady Ottoline kitchen.

Noble Inns still operates three north London-based pubs; The Princess of Shoreditch, the Pig & Butcher and the Smokehouse and is currently in the process of securing a new Smokehouse site in West London, scheduled to open early 2015.

Noble Inns still operates three north London-based pubs; The Princess of Shoreditch, the Pig & Butcher and the Smokehouse and is currently in the process of securing a new Smokehouse site in West London, scheduled to open early 2015.

Earlier this summer, it set up a separate company for its new diner-style concept Bad Egg that it hopes to grow to 10-plus sites over the coming years, with possible expansion overseas.

Chris Bickle, Associate Director at Davis Coffer Lyons Pubs & Bars Team who acted on behalf of Noble Inns on the off-market sale of The Lady Ottoline said: The Lady Ottoline is an effortlessly stylish dining pub that has received many accolades since opening three years ago. We were approached by Scott to assist with a discreet disposal and are delighted to have concluded the sale with Truffle Hunting. Pubs of this quality rarely come available, and as such, demand remains high, particularly in Central London.