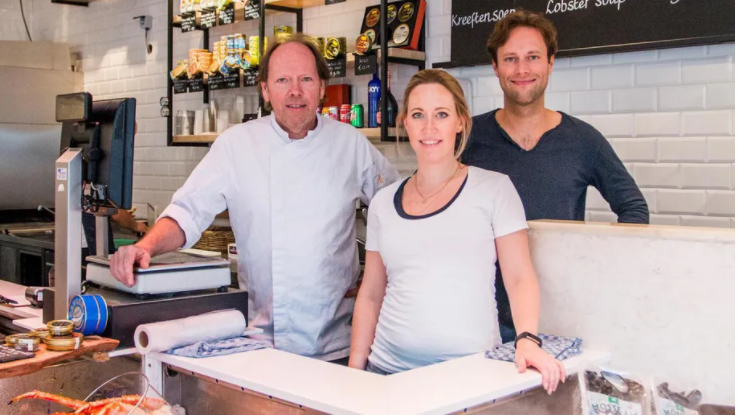 The Seafood Bar is heading to the UK. The opening in London marks the fifth site for the restaurant group, owned by the de Visscher family, and its first venture outside the Netherlands. Housed in a grade II-listed Georgian townhouse in Dean Street, Soho, the site was incredibly popular with other operators and there was much competition for the new 15-year lease.

Set to launch in August, the venue will span two floors comprising 190 covers and feature a seafood bar downstairs. The menu will include; a Fruits De Mer platter featuring; lobster, North Sea crab, razor clams and langoustines and The Mixed Grill, a combination of crustaceans and fish cooked on a La Plancha grill. The food is paired with a range of wines from across the world. In the evenings, the basement will transform into a bar serving cocktails and wine with the space hosting a monthly schedule of events.

Fons de Visscher (pictured left) worked as a fishmonger in Helmond, a small city in the Netherlands. After 27 years honing his craft and imparting his knowledge to his family, together they decided to start The Seafood Bar. The first restaurant opened in 2012 in the neighbourhood of Oud Zuid in Amsterdam. De Visscher said: “It’s our dream to bring our guests incredible seafood, and we are living that dream. We fell in love with London a long time ago, and we’re very excited we’ve finally arrived.”

Rob Meadows said “This deal is another vote of confidence in Soho’s Bar and Restaurant scene and despite the atrocious outlook just after this deal was agreed we still had underbidders and enquiries throughout lockdown. It will be exciting to see this the Seafood Bar breath new life into this landmark building on one of Soho’s most popular streets.”