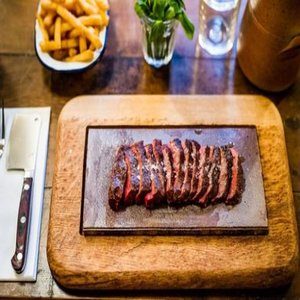 Single­-steak concept, Flat Iron, is getting ready to open its doors at its fourth site in London, at 77 Curtain Road in Shoreditch.

Shoreditch was the first home of the concept in 2012 – a summer pop-up on Redchurch Street above the Owl & the Pussycat pub – and then went on to launch its first permanent site on Soho’s Beak Street. It also operates two more central London outposts on Henrietta Street, Covent Garden, and on Denmark Street.

The Curtain Road site is 3,618 sq ft over ground floor and basement. It was formerly the home of restaurants Penkul & Banks and Beard to Tail.