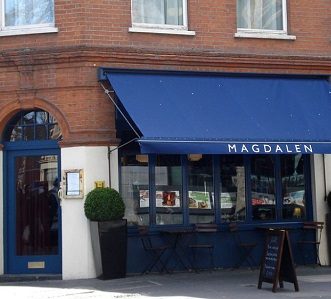 Davis Coffer Lyons has assigned the leasehold interest of the former Magdalen restaurant at 152 Tooley Street near London Bridge to Santo Remedio, the Mexican-­style cantina that was forced to close its Shoreditch site after just five months of business.

Magdalen, which has been trading for 10 years, was opened by James Faulks a graduate of both the Fat Duck and the Anchor and Hope, and colleague David Abbott from Le Manoir Aux Quat’Saisons. Having run one of Londons most highly regarded restaurants for many years, the owners are now taking a career break.

The Santo Remedio owners, husband and wife team Edson and Natalie Diaz­Fuentes will now open their new restaurant following a successful crowdfunding campaign and guest chef series earlier this year. They launched a £40,000 funding bid on website Kickstarter, with the funding going towards the fit out of the new site, which will offer a bigger kitchen and increased seating capacity than the previous location.

The 2,882 sq ft property has a 1am premises licence. It is located close to London Bridge Station, The Shard, and opposite the new Berkeley Homes One Tower Bridge scheme, a new restaurant, leisure and residential development

A premium of £325,000 was paid for the ground floor, first floor and basement A3 premises, held on a lease with approximately 14 years remaining and a passing rent of £63,000 per annum.

Rob Meadows, Director, Agency and Leasing at Davis Coffer Lyons, said: This is an exceptionally fitted, corner restaurant. The site was clearly an attractive proposition to many restaurant operators but the owners, having traded here for over a decade and gained a loyal following, wanted to ensure a new deal was handled carefully.

Despite the abhorrent and appalling events last Saturday evening, London consumers and businesses are resolute in their admiration and affection for the London Bridge and Borough Market area as one the UKs most vibrant and cherished food and cultural hubs.