Pub First Licensed During The Reign of George IV Sold 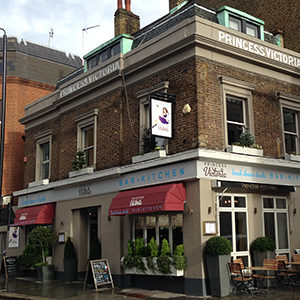 The Princess Victoria, an historic public house just off Kensington High Street, which was first licensed to sell alcohol in 1830, has been sold by Davis Coffer Lyons  the leisure specialists  on behalf of a private operator to Ali Barzin off an asking price of £150,000.

The prominent public house is held on the remainder of a 25 years Star Pubs & Bars lease from January 2008. It underwent an extensive decorative refurbishment in March 2014 and benefits from a ground floor trading space as well as an open plan dining room and trade kitchen on first floor and private accommodation on the top floor. The main trade areas extend to around 1,500 sqft.

This will be the second venue for Barzin who has operated the Duke of Kendal public house in Connaught Village near Marble Arch for around 7 years.

Chris Bickle Associate Director at Davis Coffer Lyons says: The Princess Victoria benefits from an excellent location in a sought after pocket of West London; a major attraction is the proximity to well-known High Street Kensington. Cultural and amenity draws close by include the relocated London Design Museum and Holland Park. Our clients have worked hard to lay the foundations of a solid business, which we are certain will flourish as it is developed by the new owner.

This project led to a huge amount of interest from a wide range of operators, which demonstrates the continued popularity of pubs such as this as well as the buoyancy of the overall London pub market.