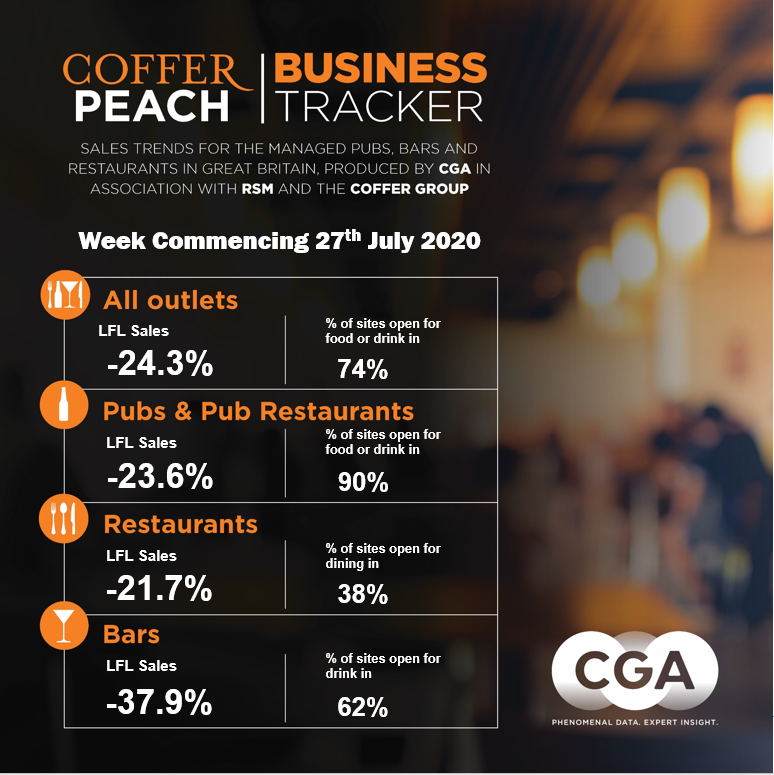 Tracker data, collected from 52 leading operators, show that for the week beginning July 27 collective like-for-like sales in those sites trading were still down 24.3% on the corresponding week last year.

However, that was a better performance than the minus 28.5% the week before, the 31.6% down the week before that, and the 39.8% level recorded in the first week after lockdown was lifted in England.

Total sales across the managed pub, bar and restaurant market showed a 33.0% increase on the previous week’s trading, helped both by better trading in individual sites and more locations being open for business. In all, 74% of group-operated sites were open for eating and drinking inside over the week, up from 68% the week before.

“Progress is being made, but if people were expecting a rapid bounce-back, they will be disappointed. We are also seeing differences across the market. While pub groups have now reopened the vast majority of their sites, many more group-owned restaurant locations are still closed, and there must be concern about how many of those might remain shuttered,” said Karl Chessell, director of CGA, the business insight consultancy that produces the Tracker, in partnership with The Coffer Group and RSM.

Restaurant groups have generally taken a more cautious approach to reopening than pubs, with only 38% of sites open for business, although an improvement on the 29% in the previous week. Those group-run restaurants that were open saw like-for-likes down 21.7% on the same week last year, compared to 22.4% down the previous week.

Bars are still having a tougher time than both pubs and restaurants, although sales improved last week. Bars that were open saw sales down 37.9%, compared to 45.7% down the week before. The percentage of group-run bars open increased from 51% to 62% from the week before.

“We are now four weeks in after the lockdown in England was lifted, and with Scotland and Wales now reopened too, we can get a better picture of progress. It’s steady but mixed – and we are seeing from individual company reports that trade in city centres is more difficult compared to many less urban locations. In particular, we know from the EPOS data we receive on food and drinks sales that the picture in central London and West End continues to be devastating. Monthly tracker data will be available next week, which will give us a more granular view of regional differences and food and drink splits,” added Chessell.

CGA is reporting trading progress via the Tracker on a weekly basis as the market continues to recover and more sites reopen, including measuring week-on-week increases.

A total of 52 companies provided data to the Tracker.